Bill Dambrova (born 1971) is a native Arizonan and ASU graduate with a BA in Studio Art. His love of art, artifacts and biology lead to a career as an exhibition designer based in Los Angeles from 2003 to 2013 where he specialized in natural history museums, zoos, and aquariums. Since moving back to Arizona in 2013 his art career became his priority and Dambrova began painting full-time. Shortly thereafter, he was accepted into the 2013 Arizona Biennial, received the Phoenix Art Museum Contemporary Forum Artist Award Grant and displayed work in four Arizona art museums.

Dambrova has exhibited in several local art spaces in the Phoenix metro area as well as national galleries such as Peters Projects in Santa Fe, Shoshana Wayne Gallery in California, Tasty Space in Las Vegas and he just recently had his first museum solo show at The Torrance Art Museum in Southern California. His work can be found in a myriad of private and public collections including: The State of New Mexico Art in Public Places Program, Mesa Contemporary Art Museum, The Heard Museum, Dupont USA, Kemin Industries, Kroger Inc., and MEOW WOLF (Santa Fe).

Bill is currently in the fabrication phase of a 6000 sqft Terrazzo floor based on his paintings for the Sky Harbor Sky Train Rental Car Return Station Scheduled to open in 2020. Bill's painting “YOU ARE THE NEXT TO BE EATEN” was just selected by Denver Art Museum curator Rebecca R. Hart to be in this year’s Arizona Biennial at the Tucson Museum of Art on view from July 6th to September 18th 2018. 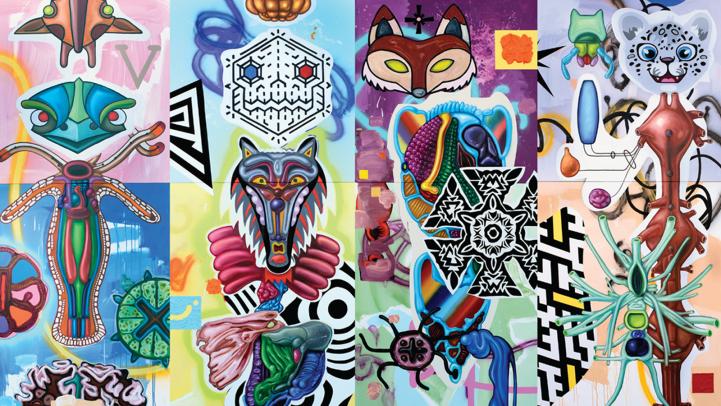 Description: This mural is dedicated to our earliest ancestors. Biological life tends to represent itself with a flourish. We see it in the plumage that birds use for display, blooming brightly colored flowers, and even the long whipping tails of reptiles. Bill also sees it in the meandering veins, arteries, and organs hidden behind the scenes inside of our bodies. In his work, he strives to emulate the energy and visceral qualities of our biotic existence. In this painting, Bill is celebrating the miraculous events that take place within and between our physical bodies. Using a totem like composition that extends beyond the borders of each panel, Bill is honoring the ongoing evolution of life on Earth.