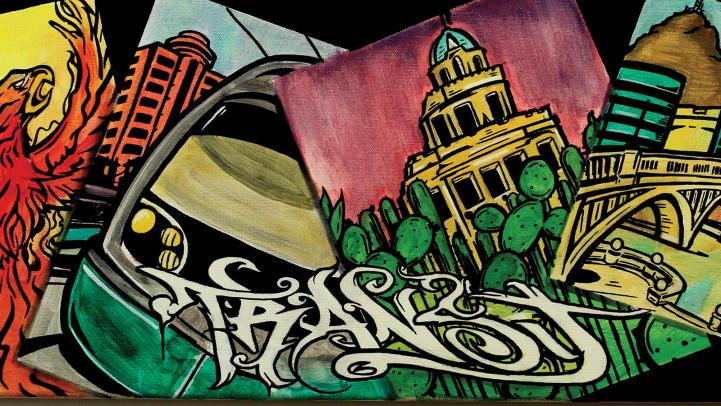 Such Styles is a Phoenix local that initiated his craft during his youth. His Street Art career officially began in the early 80’s, therefore his involvement in spray paint applications for artistic uses has spanned 33 full years, placing Such at the helm of Phoenix, Arizona’s Street Art scene.

His underground wall and freight endeavors caught attention from galleries, museums and private collectors. His work has been on display at the Phoenix Art Museum, the Arizona Latin Arts and Cultural Center, the Musical Instrument Museum, Mesa’s Contemporary Arts Museum, the Arizona Historical Museum and the Scottsdale Museum of Contemporary Art, as well as various galleries throughout Arizona. Several of his pieces can be found in a variety of permanent collections, including the Arizona State University Art Museum and the Musical Instrument Museum

Today, Such Styles legally practices his craft and is commissioned to create his signature wall pieces. His work has been featured on television, film and several publications. Such was hired by Fox Sports to create graphics for the nationally televised Super Bowl XXII show. Other diverse projects include a live billboarding campaign for Coca-Cola’s “Fuze” drink and Red Bull. You can also find his documentation in the latest publication of “History of American Graffiti” as Arizona’s initial Graffiti writer.

The son of Such, Champ Styles, is also involved in the craft and they currently work as a father and son duo, perhaps the first family team to exist. This exclusive present involvement has added new generation ideas, meshed with old school traditions, which has birthed a unique flavor to their artistic style. Along with his son, Champ, Such is involved in youth workshops teaching this dynamic craft which allows students to take on this art form in a responsible way that will reach out to their communities in a positive manner.

“Webster’s dictionary defines the word Transit as ‘a system for moving passengers or goods from one place to another.’ I, however define it a little more colorful and picturesque. I like to believe that our Valley Metro commute involves a social experience that includes a rolling art tour. Our state provides many natural landscapes and historic sights that accompany our transit routes. As passengers peer out of windows, they are greeted with a collection of some of our city’s more obvious landmarks, including some downtown architecture, our native desert plant life and the unique mountain landscapes that are accompanied with our beautiful Arizona skies. As our light rail snakes its way through our desert cities, it allows passengers to relax for a while and enjoy the blessings of some spectacular views. I wanted my art piece to celebrate the experience as well as highlight our desert cities’ delightful characters.”