Construction projects wrapping up at rail operations and maintenance center 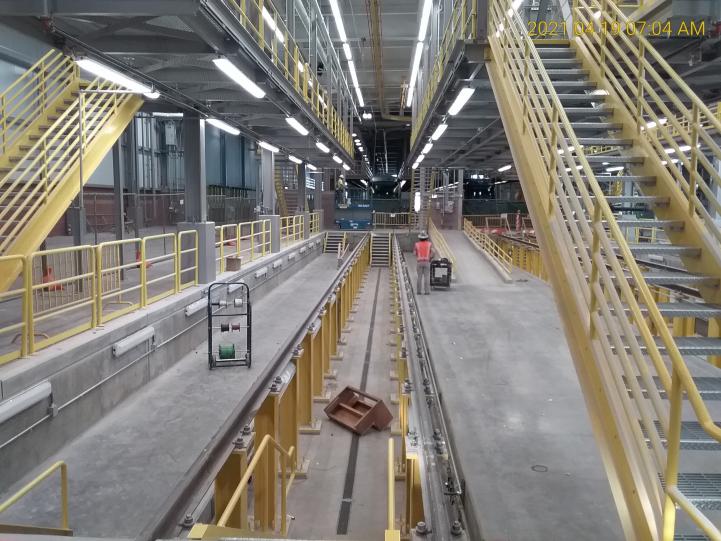 New and old buildings joined at the Maintenance of Equipment facility

Expanding Valley Metro’s Operations and Maintenance Center, the home base for light rail trains and streetcars, has been underway for two years.  Construction has both expanded and improved space for the new fleet, as well as hundreds of workers.  With 90% of the project complete, the agency has more capacity to support light rail expansions and the opening of streetcar later this year.

Here are some of the highlights of the ongoing project :

Expansion of the Maintenance of Equipment (MOE) building at the Operations Maintenance Center, the place where trains are worked on, is complete, said Andrew Ditter, Valley Metro’s resident engineer. “Construction added more than 35,000 square feet to the MOE and brings the total size to 173,000 square feet”, Ditter said.

Existing and newer buildings are now connected due to the removal of the MOE building. Construction teams are connecting heavy-duty cranes that will move back and forth inside the newly joined buildings.

The Maintenance of Way (MOW) complex is nearly doubling its size. The MOW houses teams that maintain track safety and signals along with the overhead power lines for light rail.

Elsewhere, construction crews have installed 9,000 feet of track inside the rail yard. The new sections of the rail yard are now powered up with crews testing the system to ensure safety.

In its ongoing safety and sanitation efforts, Valley Metro has added a new light rail and streetcar cleaning platform along with upgrades to the current system.

“The existing wash equipment is at the end of its serviceable life,” Ditter said. “This will protect the new vehicles and ensure clean vehicles for the public each day.”

According to Ditter, the added space doubles the capabilities of cleaning crews to service trains and streetcars as they return from their service day.

The construction project at the Operations and Maintenance Center means Valley Metro can operate and maintain a fleet of approximately 90 vehicles, from the current 50.

Construction at the rail yard is expected to be complete in the fall of 2021.