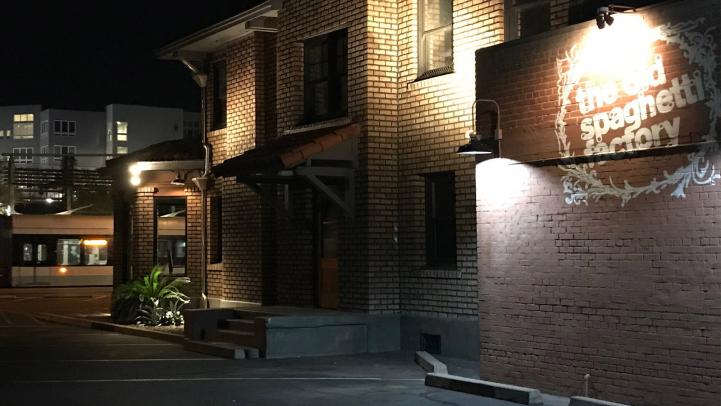 The Old Spaghetti Company near the McDowell/Central Ave light rail station  has been around since the early 1970’s.  Housed in a 1920’s era building, there have been a couple of stories of homicide on the property. When it was a residence it was reported that someone broke in and murdered the elderly resident.   Second one was that of a female that was shot and killed in the basement in the 1930’s.  My first trip was in 1974 as a senior in high school for date night.

I have always heard the place was haunted but didn’t think much about it until I had a paranormal encounter in the bathroom of all places.

I met friends there after work for an early dinner.  Before leaving, I headed to the ladies room.  While I was the only one in the small bathroom, I observed a random shadow that appeared outside the door and was moving towards the back of the bathroom.  Then, automatic towel dispenser goes off with no one activating it.   I wash my hands taking the magically appearing paper towel and leave.  I checked to see how far away the towel dispenser activates.  It appears that it only dispenses towels if someone is within two inches of the sensor. So, where did the shadow come from and did it cause the paper towel to dispense? Did I just experience an inhabitant from the past at The Old Spaghetti Factory?  I’ll admit it rattled me.

Now, when I am in for meal I always ask my waiter if they have had any “experiences” while working.  They report several different types of odd occurrences, ranging from hearing a woman sobbing, whispers and screams as well as furniture moving, lights blinking on and off and floating apparitions.  Banquet rooms having the place settings rearranged and plates flying off the kitchen shelves.  Another waiter said a medium told him there was a child on a bicycle with an old time bell that rides around the southeast corner of the building and a stern motherly figure looks on at the people inside upset that they are in her house.   I look forward to visiting soon to grab a meal and maybe a surprise visit from an…‘old friend?’

Dennise Metzger
Rail Operations Communications Specialist
Dennise is a Phoenix native, born at St. Joseph's Hospital and graduated from Paradise Valley High School. Her first career was with the Phoenix Police Department as a Communications Operator (Radio Dispatcher/911 Operator). During her career she received numerous commendations. She received one of the highest honors from the Police Chief: the Police Chiefs Certificate of Recognition. She called her time there “an amazing sometimes very stressful and fascinating career”. In November 2018 she retired from Phoenix PD and started a second career with Valley Metro.