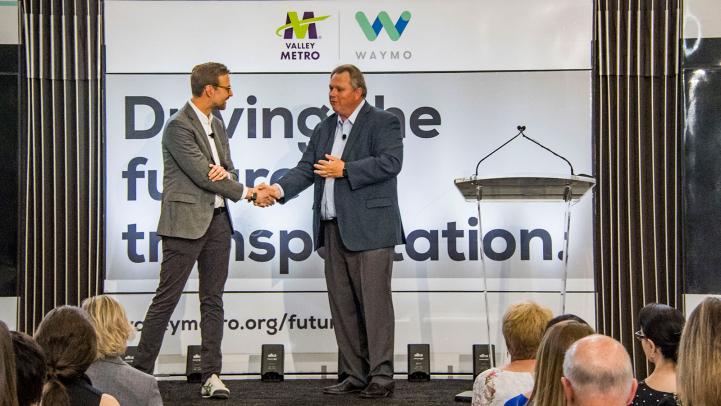 Today, Valley Metro and Waymo joined forces to introduce a new partnership that will help drive the future of transportation. Using Waymo’s self-driving vehicle technology, Valley Metro will participate in an innovative travel solution pilot that can be modeled across the country.

Today’s event to announce the partnership occurred amidst two Waymo vehicles on either side of a light rail train at the Valley Metro Rail Operations and Maintenance Center in Phoenix.

“Having additional travel options enhances quality of life for current and future generations and creates greater independence for seniors and people with disabilities,” said Tolmachoff.

“This is the first partnership between a public transit system and a private autonomous vehicle company that will provide a mobility service outside of a controlled environment,” said Scott Smith, Valley Metro CEO. “Think of it as the start of mobility on demand or mobility as a service.”

“Waymo is honored to be involved in the exploration of new transportation solutions with Valley Metro,” said Shaun Stewart, Waymo Chief Business Development Officer. “We’re excited to learn how self-driving vehicles may connect people to public transit and help fill some mobility gaps across the greater Phoenix area.”

At today’s event, light rail rider and Waymo Early Rider Samantha Jackson, spoke on how she and her family use the self-driving vehicle service to travel to their favorite destinations.

“Even though my husband bought me my dream car last December, I would honestly like it to be my last car,” said Jackson. “I have kids and I would love it if they would never have to own a car.”

She said she hopes that the partnership between Valley Metro and Waymo really takes off and she’s glad to be a part of it.

“This is a tremendous leap forward as the public transit industry transforms as the integrator and the backbone of a multi-modal system,” said APTA President and CEO Paul P. Skoutelas. “Congratulations to Valley Metro and Waymo for providing the leadership and a practical test pilot example of how to integrate this technology which may someday be replicated by many transit agencies across the country.”

To learn more about the partnership, go to valleymetro.org/about/future. To see photos from the announcement event, visit our flickr page.

About Valley Metro: Valley Metro provides eco-friendly public transit options to residents of greater Phoenix and Maricopa County including the planning and operations of a regional bus system and the development and operations of 26 miles of light rail. In Fiscal Year 2018, total ridership for the system was 67 million passengers. Seven high capacity transit extensions are planned or under construction that will create a 66-mile system by 2034. Valley Metro also offers transit options including alternative transportation programs for seniors and people with disabilities, commuter vanpools, online carpool matching, bus trip mapping, bicycle safety and telework assistance. Two Boards of Directors set the policy direction for the agency with the intent of advancing the regional public transit system. In October 2017, the Boards approved a “Respect the Ride” Code of Conduct, focusing on creating a safe and positive rider experience, while also discouraging disruptive, intrusive, unsafe or inappropriate behaviors in a public setting. Get the latest news by following us on Facebook, Instagram and Twitter or visiting www.valleymetro.org.