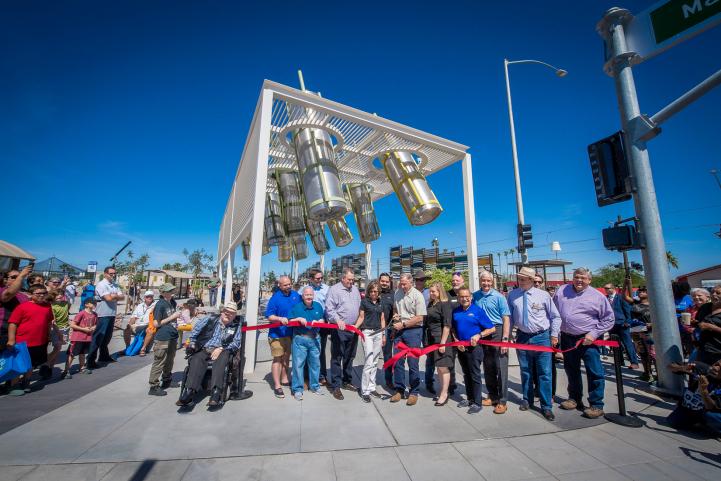 Amongst a ribbon cutting and ceremonial fanfare, officials and hundreds of people from the local community welcomed the first train into the new Gilbert Rd/Main St light rail station on Saturday. The 1.9-mile Gilbert Road light rail extension opened to serve residents in Mesa and connect people to jobs, school and entertainment across the now 28 miles of light rail service across Mesa, Tempe and Phoenix.

“Since light rail opened in Mesa, it’s been a force for revival and renewal,” said Mesa Mayor John Giles. “Not only does it provide options for our residents to reach important destinations, it has resulted in $240 million of completed economic development projects with more on the way. Without light rail, investment on this scale, over the past few years, would not have occurred.”

In addition to the capital investment, light rail brings with it new infrastructure such as freshly paved streets, new sidewalks and natural landscaping. Public art is also an important part of the Valley Metro Rail system. Artists bring a unique level of craft, detail, history and beauty to each light rail station and transit facility. They also work to preserve the culture of the surrounding neighborhoods.

“This is a wonderful day for Mesa residents and our entire region. Cities are most successful when we work hand in hand, and this project is a perfect example of that,” said Phoenix Mayor and Valley Metro Rail Chair, Kate Gallego. “The light rail system is important for so many because it offers independence and inclusivity. I have a deep passion for ensuring that we have diverse transit options for all residents and will continue to work with both Phoenix and our neighboring cities to see these options expand and grow.”

The extension, which includes the light rail system’s first roundabout at Horne and Main Street, broke ground in October 2016. It includes a station at Stapley Drive and a transit center with bus service and a park-and-ride at Gilbert Road.

With the original 20 miles of light rail that opened in 2008, Mesa had one mile of service and a station at Sycamore and Main Street. Seven years later, three new miles of rail with four stations began operating to downtown Mesa. Since construction began in 2006, there have been 27 completed projects along light rail in Mesa valued at $240 million in residential, commercial and educational development. Another 18 projects are planned near light rail in Mesa adding up to an investment of another $133.5 million. 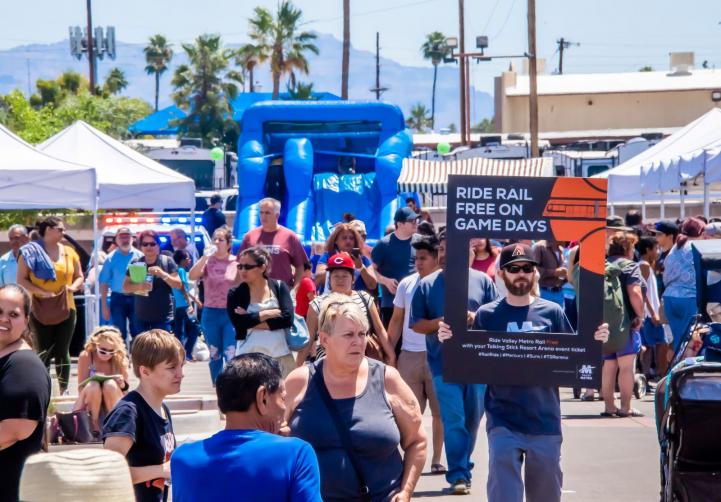