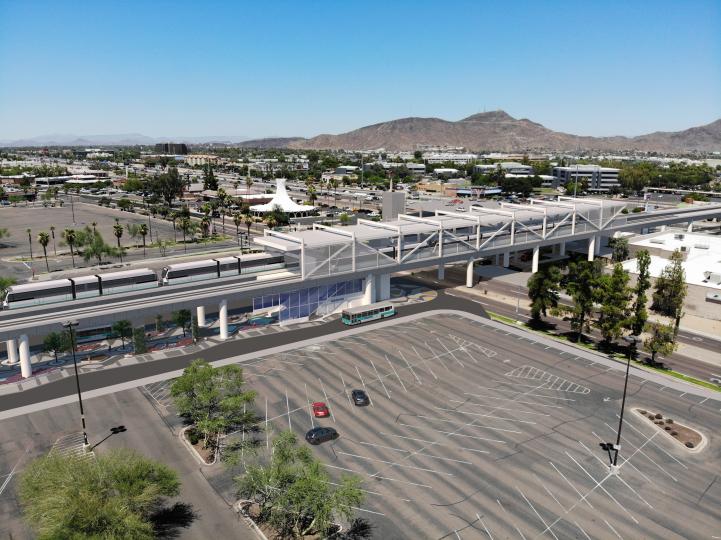 Construction on a new 1.6-mile extension of light rail, which will include the system’s first elevated station, is now underway. Crews have begun utility relocation, the first phase of construction, on the north side of Dunlap Avenue just west of the existing 19th Ave/Dunlap station.

In addition to a new transit center for light rail and bus service at Metrocenter, the extension also includes a rail-only bridge over the I-17 and two new stations. The community will also enjoy seven public art installations along the extension and updated landscaping, including more than 200 new trees.

“Light rail is an important component of our transportation infrastructure as it connects residents across the Valley and attracts new businesses and employment opportunities. Residents and businesses in the Metrocenter area are ready and excited for construction on the Northwest Extension Phase II to begin as the area is primed for quality development driven in part by light rail,” said Councilwoman Thelda Williams, whose district includes the Metrocenter area and is chair of the Transportation, Infrastructure and Innovation Subcommittee.

The extension recently received a $50 million allocation of grant funding from the Federal Transit Administration, as part of the Capital Investment Grants Program. In addition to this project, Valley Metro currently has two other projects now under construction: South Central Extension/Downtown Hub and Tempe Streetcar.

“With this extension of light rail, we’re building a north/south light rail line and new connections for our riders to offer greater flexibility and opportunity for travel,” said Scott Smith, Valley Metro CEO. “From the northwest to downtown and soon, south central Phoenix, we’re improving regional access for residents and visitors alike.”

About Valley Metro: Valley Metro exists to connect communities and enhance lives each day by providing eco-friendly public transit options in metro Phoenix. In Fiscal Year 2020, total ridership for the regional bus and 28-mile light rail system was 53 million passengers. Five high capacity transit extensions are in planning or under construction that will create a 50-mile system by 2030. Valley Metro also offers  alternative transportation programs including paratransit services for seniors and people with disabilities, commuter vanpools, online carpool matching, bus trip mapping, bicycle safety and telework assistance. Two Boards of Directors from 18 local cities and towns and the county set the policy direction for the agency with the intent of advancing the regional public transit system in Maricopa County. Stay up-to-date by following us on  Facebook, Instagram, YouTube and Twitter or by visiting valleymetro.org.

About Transportation 2050: In Aug. 2015, Phoenix voters approved Transportation 2050 (T2050), a 35-year citywide transportation plan. T2050 is overseen by the Citizens Transportation Commission and includes improved frequency on local bus service, new light rail service and stations and major street improvement projects. Funding for T2050 comes from a 7/10ths of a cent city sales tax that started Jan. 1, 2016. Over the life of the plan, the funds are estimated to generate about $16.7 billion, or more than half of the plan's overall cost. There will be an additional $14.8 billion in federal and county funds, passenger fares and other sources. For more information, visit the T2050 page or follow Phoenix Public Transit, Phoenix Street Transportation and Valley Metro​ on Twitter.​​​