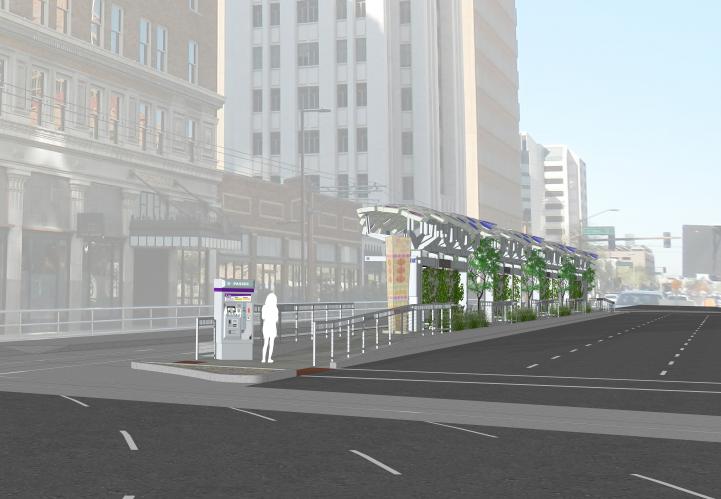 You might be seeing more yellow safety vests and hard hats around Phoenix. Crews began the process of identifying underground utilities this week in the downtown area, marking the start of construction on the South Central Extension/Downtown Hub light rail project.

The utility improvements in the downtown area will be extensive: for every linear foot of trackway installed, six linear feet of wet utilities, including water, sewer or storm drains, will be removed, relocated or upgraded.

“With the beginning of construction on the South Central Extension/Downtown Hub, we continue our infrastructure investment in the greater Phoenix area,” said Phoenix Mayor Kate Gallego. “We’ve seen how light rail has benefitted people across the Valley, and we can now extend those benefits to new neighborhoods in downtown and South Central Phoenix.”
In addition to improved utilities, the project’s new infrastructure will include dedicated bicycle lanes, 21 new bus pullouts, re-built sidewalks, re-paved streets and an estimated 160 new trees along south Central Avenue.

Utility work will occur over the next several weeks in the following areas:

“Light rail will ultimately bring great opportunity by providing greater access to our historic community,” said Phoenix Councilmember Michael Nowakowski. “This extension will make the unique offerings of South Phoenix available to others, attracting new customers, businesses and jobs to the area.

Phoenix Councilmember Carlos Garcia added, “It is essential that we remain dedicated to supporting our community and local businesses, working together so that the people of Phoenix thrive during the construction phase and continue to succeed long after it’s completed.”

Stakeholders will be able to download a project-specific app in the coming weeks to receive construction activity notifications, submit a question or comment and view a map of current and upcoming traffic restrictions. The project app will also share construction information with the Waze app so drivers can access traffic restrictions in real-time. In addition to viewing information on the project page, stakeholders are welcome to visit the South Central Extension Community Office located at 5040 S. Central Ave. to meet with Valley Metro’s community outreach coordinators, learn more about the project and receive construction updates.

About South Central Extension/Downtown Hub light rail project: With the voter-approved Transportation 2050 citywide transportation plan, the timeline for the South Central Light Rail Extension/Downtown Hub is advanced by 11 years. The extension will connect to the light rail system in downtown Phoenix and travel south to Baseline Road. With nine new stations and art elements, the 5.5-mile expansion links South Phoenix to other areas of the Valley. The project includes a transit hub in downtown Phoenix, which supports improved access to education, entertainment and employment centers around the Valley. Valley Metro is collaborating with 18 artists to design art installations throughout the extension.